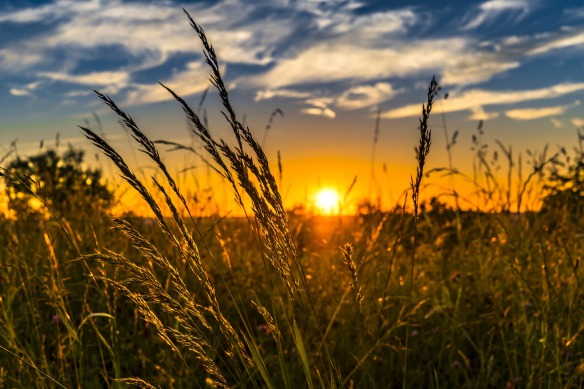 Observe the grasses’ greeting as they wave within the wind;
They bless the ground beneath our feet as if we’d never sinned.

The quiet kindness of the trees feeds rivers in the sky;
They offer up their strength to every creature passing by.

Streams bear precious nutrients that they themselves don’t need,
Reviving weary souls of every nation, tribe and creed.

Birdsong adorns the fragrant air and sunset’s amber hues
Give otherworldly warmth to those who haven’t paid their dues.

This fount of generosity is but the faintest glimpse
Of all the Father does for us and many others, since

Eternally He gives all that He is to His own Son,
Who gave Himself to pay for all the awful things we’ve done.

His Spirit pleads on our behalf and gives gifts on our way
Of life in full abundance towards eternal day.

(I composed the above while walking around our village to give my eyes some rest from looking at computer screens, since a recurring eye problem (malfunctioning tear duct causing severe eye dryness and headaches) has flared up again. Prayers for me would be appreciated).

Inviting travellers to stop a while and take a break.

Its soothing roar creates a cloud of sweet nutritious mist,

Soaking vibrant greenery as if all freshly kissed.

Luscious churning, dancing foam invites you to dive in,

Massage yourself with bubbles and invigorate your skin.

Fresh aerated water in which the salmon thrive,

A dip into the cooling depths will make you feel alive.

The kind that really clears your head and frees your mind to think.

Put me beside a waterfall, I’m at peace all day;

I hope the River of pure Life has some along the way.

Priceless treasure from the sky,
Granting life when death was nigh,
Refreshing and enabling both
Imposing trees and undergrowth.

Farmers grin and celebrate
And now are free to contemplate
What will grow on their good lands
And what they’ll glean with calloused hands.

Washing out upon the line
Is rinsed for free a second time.
Husbands look up from the bar,
“Now I don’t need to wash the car.”

Puddles bring young children joy
Greater than a brand new toy
Their mothers might not be impressed
At the state of their Sunday best.

Lawns awake and gardens bloom,
Woven on a verdant loom.
Vegetables and herbs en masse
Thrive beside the cultured grass.

Barren cliffs to fragrant falls,
Silence to thronged wildlife calls.
All this and more the rains do bring,
Hence we now their praises sing.

In ancient times this sacred hill did nourish weary souls
A nobleman once stood here and declared “We’ve reached our goals.”
The land I see from this high place is fertile, watered, green;
Here we can carve out a life that’s safe and most serene.

Houses and small villages can be marked out and built
Fields planted in this thick dark soil enriched with rain and silt.
A fortress to defend our young and old upon that ridge
Looking down upon that great wide river that we’ll bridge

Some young are not so keen to climb the steep paths up the hill
Some even lose heart so much as to make themselves quite ill,
Insisting they have not the strength to even reach its base
With wails and whines and tears that keep on streaming down their face.

The father makes the effort to snap his son out of it
Not letting despair win the day, not letting his boy quit
With gritted teeth they climb the slope part way and then they rest
Seeing that his son has so far been doing his best.

Then son decides upon a plan that takes his dad aback
To take a shortcut up the hill far from the concrete track.
The spirit of adventure lives and glows from his young face
Dad can only follow, barely keeping up his pace.

They reach the top, exultant, son has grown his mind and heart;
He’s learned of all that he can do, if only he would start.
Great obstacles now hold less fear, as he knows that he can,
He’s taken one small step towards becoming a young man.

A distant roll of thunder announces the approaching turbulence;
Ominous gusts herald the nearing storm.
Large raindrops, as if in slow motion, fall past the window as doors and skylights are hurriedly secured.
The dry road outside turns speckled, then windswept spray wafts across the tarmac.
The air becomes diagonally striped, puddles appear and grow in seconds, alive with exploding impacts.
Lightning crackles all around, illuminating the darkened clouds.

Trees wave to and fro, helpless but resilient.

The rain eases to a gentle pattering hiss, almost serene, as children run for the cover of home.

Puddles overflow the kerb and spread across the grass, transforming into a temporary swamp.
Cars leave trails of ripples in their wake as drains silently ease the flood away.
The air smells fresh and earthy as the rolls of thunder grow more distant, reminders of the power of nature’s wrath.

The atmosphere’s mild anger is sated, the earth’s thirst slaked, the air refreshed and cleansed as the storm cloud drifts on to its next beneficiary.

Day after sunny spring day cooped up inside, worshipping a glowing screen.
I open the door to the garden, surprised by the smell of life.
Bathing in the vivid sun, I can but smile;
I feel the haggard lines under my eyes melt away in the soothing warmth.
How could I have been this stupid? All of this abundance just beyond my door.
I will not make that mistake again.

Last week’s post inspired a series of connected thoughts that I intend to share with you all in sequence.

Looking at little Timmy’s enthusiasm for the same thing again and again raised in me an obvious question, what are the things that I, as an adult, never tire of watching? END_OF_DOCUMENT_TOKEN_TO_BE_REPLACED

I’ll be away for three weeks in a few days’ time, so it may be a while until my next post.

Calming mists and cleansing rain
Warm mountain springs that soothe your pain
Refreshing and invigorating
Healing and rejuvenating
Enriching and new-life-giving
The miracle for all.

Continuing the theme of contest entries, this is my entry to another contest, where it beat out a whole other entry to win, so I’m not sure that can really be counted as a victory. Entries had to include the words fire, ice, black and white.

Huddled round a fire in the days of old,
Hiding from the ire of the burning cold.
Under the stars and the grey-white moon,
Comes hope from afar that will get here soon.

A fortress of ice that gleams in the day,
With beauty to entice down a dangerous way.
“Onward, you hounds! Pick up the pace!”
Drowns out the sounds of the maddening race. END_OF_DOCUMENT_TOKEN_TO_BE_REPLACED

Well, I found out this week that my entry to a major poetry competition was unsuccessful, I didn’t finish in any of the winning places (that’s the last time I pay to enter a poetry contest). I submitted two poems, Once (Which I posted on this blog last year) and this effort:

Fresh sunlight plays with diamonds soft
That glisten as they sing
In silent awe that drifts aloft
A peaceful offering. END_OF_DOCUMENT_TOKEN_TO_BE_REPLACED