The first quarterly digest of the new format of Sci Phi Journal is about to become available to subscribers, and it features some exclusive content and gorgeous cover art by Thomas Budach: 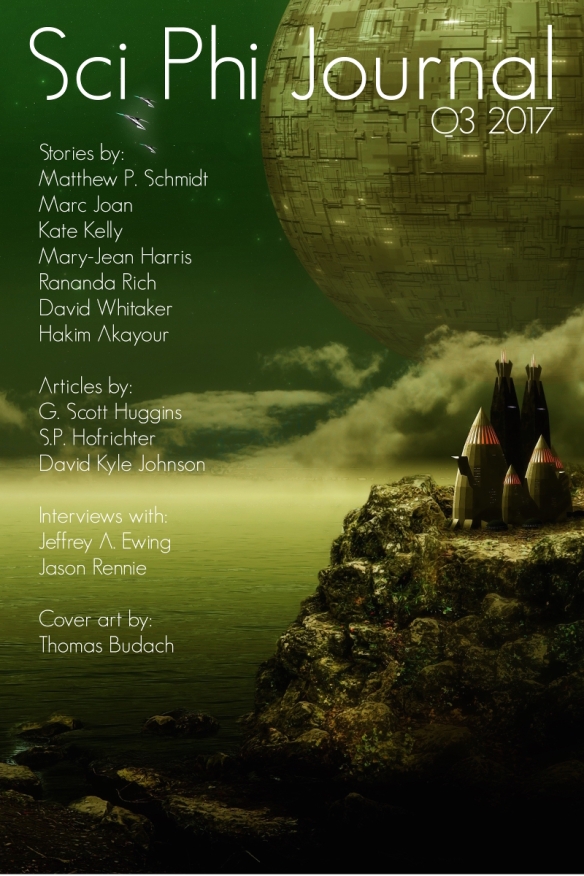 Sci Phi Journal is under new management, with a new look and new business strategy, though many of the old staff have stayed on, including myself. All the subscriber-only stories from the previous website are now free to read, other changes to how things will move forward can be found here:

Superversive Press made the following announcement earlier today, these deals run out in about 3 hours from now (I was the editor for both of these, and contributor to the second, so receive a share of the royalties from each sale):

You can currently pick up the dystopian science fiction novella The Product by Marina Fontaine in a Kindle Count down sale, proceeds from which go to feed the author as well as help keep Superversive SF alive! The Product is a story that Dragon Award winning author of CTRL ALT Revolt! Nick Cole, said ““Fontaine expertly paints a loveless future where what’s human and what’s real is dangerous and highly illegal. Taut, passionate and compelling, this vignette of a dark future reminds us that we are still human, no matter what laws are passed. A fearless warning for these fear-filled times.”, get it now before the sale is over!

Sci Phi Journal stories and article is available on a Kindle countdown sale as well. Proceeds feed authors and help keep the lights on too as well as giving you a good Sci Phi fix.

The Conservative Libertarian Fiction Alliance is running it’s Novermber Booknado, featuring two recent releases that I edited, plus another one by fellow Superversive Literary Movement founder L. Jagi Lamplighter. Check them out if you’re in the mood for a refreshing read:

The November CLFA Booknado churns across a darkened literary landscape, demolishing tired, old, ideologically Progressive pap and blasting fresh fiction choices all across the land! Pick up one of our featured titles today and join the movement.

Click on the book image to learn more and shop!

(Titles are considered new releases and/or sold at featured promotional price points as of November 14 and 15, 2016.)

Keeping the Faith (Book Two of the John Fisher Chronicles) by William Lehman
It was suposed to be an easy case, a good way to “get back on the horse” and because it looked like a ‘Thrope case, it was right up Detective Fisher’s alley. Of course, nothing is ever easy when Fisher is involved, and when they found the murdered Marine, it all went south…

Blood of Invidia (Maestru Series Book 1) by Tom Tinney and  Morgen Batten
Aliens, Vampires, and Werewolves…Oh, My!
These are not cute, candy-eating aliens or sparkly tween vampires. It’s time for you to run (and your little dog too)!

In the Lamplight: The Fantastic Worlds of L. Jagi Lamplighter by L. Jagi Lamplighter
Sixteen tales of wit and wonder, of mischief and magic, where simple folk and extraordinary individuals wrestle down their own fears to find the courage, cleverness and, occasionally, faith to face life’s dangers and enchantments. Come! Enjoy the wonder!

Renegades: Out of Time (The Renegades Book 3) by Kal Spriggs
Can a group of explorers, pirates, and mercenaries find out the secrets of an ancient alien facility before time runs out?

Betrayals: A Jack Del Rio Thriller by Richard Paolinelli
Star FBI agent Jack Del Rio is back, and he’s the only man in America who can stop the string of assassinations and conspiracies that threatens to topple the entire government and bring the United States under the thumb of evil dictatorship.

The Product by Marina Fontaine
Would you risk your life to come awake? (Novella)

Murphy’s Law of Vampires (Love at First Bite Book 2) by Declan Finn
Murphy’s Law dictates that when you’re ready for vampires …. you have to face a demon.

Some Other Shore by Dwight R. Decker
A collection of six lighthearted romps exploring the outer fringes of history and science, with mermaids (two different kinds), human curiosities, and even a dead king who never existed.

Sci Phi Journal, Q1 2016: The Journal of Science Fiction and Philosophy by multiple authors
Stories, articles and reviews to keep you entertained and questioning.

A Different Heroism (Father Jay Book 3) by Jane Lebak
A disabled priest and his brother, an agnostic cop, find themselves working together to save the son of a murdered police officer from two rival gangs.

By The Hands of Men, Book One: The Old World by Roy M. Griff
English Lieutenant Robert Fitzgerald fights for his soul. Refugee nurse Charlotte Braninov fights for her very survival. The star-crossed lovers meet less than a mile from the front lines in WWI before forging their destiny in a world shattered by war, greed, and the lust for power. First book of the acclaimed and beloved historical fiction series.

For those of you who are not (yet 🙂 ) subscribers to the excellent Sci Phi Journal (in my totally unbiased opinion as frequent contributor and editing staff member 😛 ) can now obtain for the paltry sum of $4.99 the first three months of this year’s stories and articles, including one by yours truly, a polished and expanded version of one of my longer opinion pieces first posted here at this blog.

Click on the image below to take a look.

Of course, if you are a subscriber to the journal, you will get to read all of Sci Phi’s excellent content 6 months before it becomes available to everyone else, plus other additional content and rewards.

To become a subscriber, go here

Calling all budding philosophers with a hankering for expanding your literary boundaries!

The American Philosophical Association is running a short story competition in collaboration with Sci Phi Journal, with a first prize of $500  from the APA and publication in Sci Phi Journal. It is open to everyone with a submission deadline of February 2017.

For details, see the announcement over on Eric Schwitzgebel’s blog.

Extra! Extra! Read all about it! Or rather, read for yourself for free my picks for the best story and article from each of last year’s issues of Sci Phi Journal. Some choices were very hard to make, so people who have read the issues may disagree with my selections, but I hope you’ll all agree that all of these offerings are worth a read, and it’s hard to argue with the price, isn’t it?.

Kate Paulk, organizer of this year’s Sad Puppies campaign, thought Sci Phi Journal’s Hugo packet stood out from the rest when it came to the semiprozine category.

Take a look and see if you agree… 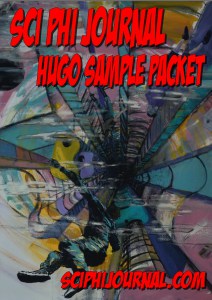 As this is a free ebook, please distribute and share it as widely as possible, even hosting it yourself, as long as the files themselves are not modified. If you like what you read, please consider becoming a subscriber to the journal at the journal’s patreon page. (As a member of the journal’s editing staff, I receive a portion of reader’s subscriptions, so subscribing to the journal will also indirectly support me).

(My apologies for the lack of activity at this blog, I have been hard at work on some projects that are not yet ready to be announced, but I am very excited about.)

This is another proud moment. Sci Phi Journal, where I am a member of the editing staff and have contributed to more issues than anyone else, is one of the five finalists for a Hugo award in the ‘Best Semiprozine’ category, and SuperversiveSF, where I am a regular contributor and one of the founding members, is one of the five finalists for best fanzine. Fellow SuperversiveSF member and Sci Phi Journal contributor Brian Niemeier is on the shortlist for the John W. Campbell award for best new writer, the only finalist not to be in his final year of eligibility.

The full list of finalists can be found here

To become a subscriber to Sci Phi Journal, go here

As the title says, I’ve had an article published over at the sci phi journal website as part of its free content. Long-term followers of this blog might recognize it as a (much improved imho) rewrite of an older post from here:

For access to all of the paid content, you can become a subscriber to the journal here.

In the interests of transparency, as a contributor (and also as an editor of the magazine), I receive a share of the proceeds from subscriptions, so the more people sign up for subscriptions, the more I (and the other fine contributors) will be paid.

The new format of Sci Phi Journal is about to begin, with the first article due within the next hour or two. I have an article that will appear in January, but to get access to all the top-quality content (and some other benefits), you’ll need to be a subscriber. Details can be found over at the Sci Phi Journal site