In Issue #5 of Astounding Frontiers we bring you more pulpy goodness with stories from Julie Frost, Arlan Andrews and Patrick S. Baker as well as continuing serials from Ben Wheeler, Corey McCleery and David Hallquist. We also have another article from Pulp expert Jeffro Johnson and a fun poem by myself that should be familiar to long-term followers of this blog

Please join us in travelling to Astounding Frontiers!

Astounding Frontiers Issue 4 is now available for purchase on Amazon, featuring stories by Brian Niemeier, Julie Frost, David Hallquist, Ben Wheeler and Corey McCleery and an article from the Professor of Pulp himself, Jeffro Johnson! Suit up and enjoy!

Astounding Frontiers Issue 3 is out now on Amazon. Experience post-apocalyptic battles against carnivorous chickenmen, razor storms, vicious chitinous cave creatures, being trapped at the bottom of an impossibly deep ocean, a motorcycle chase across the plains and valleys of Mars, and more!

Astounding Frontiers Issue 2 is now out on amazon, featuring stories by Dragon Award Winner Brian Niemeier, Karl Gallacher, Scott Washam and Russel May. The serials by John C. Wright, Ben Wheeler, Nick Cole and Jason Anspach continue, and the cover features the beginning of a new serial by SuperversiveSF contributor Corey McCleery, whose awesome dad has been helping me with music videos. (there are more to come of those) Click on the image below to grab yourself a copy for the low, low price of $2.99! 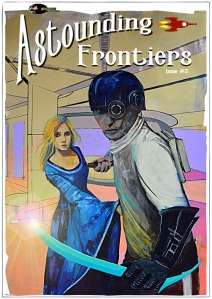 For those of you who’d like a more epic version of the above video, using some music by the ever-excellent Kevin Macleod, your wish is granted:

As if the new version of Sci Phi Journal wasn’t enough, in just three days Superversive Press is going to launch the new Space Opera/Space Romance/Pulp magazine Astounding Frontiers, featuring serialized stories by not one but two Dragon Award winners:

besides many more fun and imaginative stories by a variety of talented authors, both established and new talent.

Watch out for it, and spread the word!