How the Promotion Went

Well, the threeway kindle countdown deal is now over, and thanks to the signal boost from scifiwright, castalia house and elsewhere, the results were very encouraging, far better than any previous sale I’ve run.

The first two days of the deal began much like any other, but once the plug from scifiwright came, things got interesting.

The immediate effect was to more than triple my record for page views in a single day (in fact three of the remaining five days of the promotion broke my previous daily traffic record.)

On the first day after the scifiwright boost, I sold almost six times as many books as my previous record daily sales at amazon. In fact every single day of the promotion after the Wright effect took hold broke my previous best day for book sales.

All three books reached their highest ever rankings at amazon:

And Selected Verse – Faith and Family briefly took the number one spot in Family-themed poetry:

As can be seen from the overall best sellers rank, this took far less absolute sales than the other books achieved, since poetry books are on the whole far less popular than other categories of literature. However, this is the first time I’ve ever grabbed a number one spot in an Amazon category, so I am suitably proud of this landmark achievement. Beyond the Mist approaching the top 6,000 ranking is no mean feat, and I am very happy with that. The sales of Nobility Among Us during the promotion means that after two years it has finally broken even, and any future sales will be clear earnings (if that is the right term). Beyond the Mist still has some way to go to achieve that, but the initial signs are very encouraging.

I would encourage anyone who has read and enjoyed any of these books to consider writing a review on amazon, as it will help me as an author in more ways than one, even if you feel that what you want to say about the book has already been said by someone else.

Purely for bragging value, I broke into the top 400 science fiction ebook authors for the first time.

Where We Go From Here

Now that the kindle discount deal has ended, all three ebook prices have returned to their previous US territory values, and the system does not allow them to be changed for the next thirty days. However, I can still change their prices in the other amazon territories, and so I have permanently set them to the minimum price that still grants a 70% royalty, in many cases this is significantly less than the equivalent US price, for example the new indian territory price of 99 rupees is the equivalent of US $1.44 (I had my first ever sale to the amazon india territory during the promotion, here’s to many more!). For those of you who fall under a non-US territory, take a look at the new prices and decide whether or not you want to take the plunge!

Progress continues on Selected Verse – Heroes and Wonders and it should be ready for release within approximately a week of my posting the final part of “The Beast” (there are still a couple more parts to go there). 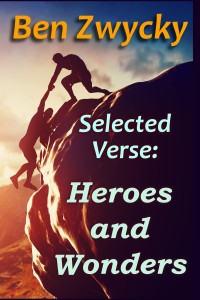 I am not in a position to give a fixed date, as there are always last-minute snags when finalizing a book for release, but watch this space for more news on that.